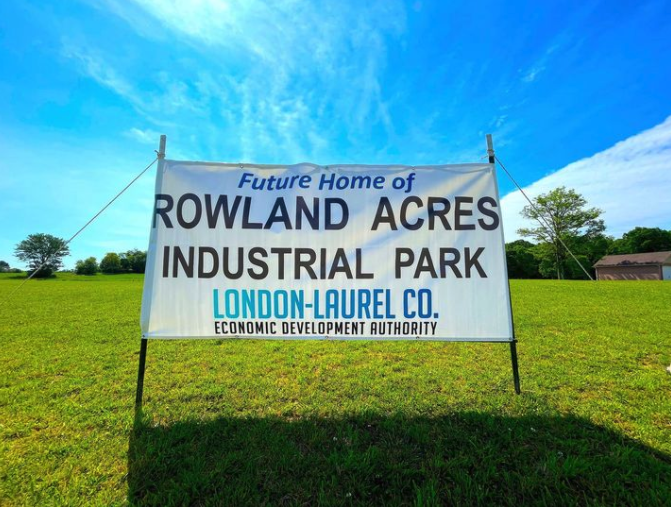 Today is another banner moment in the development of London and Laurel County.
Just as walls are going up for a massive new warehouse-distribution center in the county’s seventh industrial park, economic development officials announced Wednesday they have purchased a prime piece of property that will become the county’s eighth industrial park.
The 177-acre Rowland Acres Industrial Park will be located on West Ky. 192 less than two miles from I-75 exit 38. The farm currently is being used to grow wheat and soybeans.
Rowland Acres is a large, accessible and mostly-level piece of land that is perfectly suited for the county’s development needs now and in the future, said Paula Thompson, executive director of the London-Laurel Economic Development Authority.
“All of parks are full or filling up quickly, so it became imperative that we secure more property to recruit new businesses to the area,” Thompson said. “We’ve been looking all over the county for available property, and this by far is the best tract available. We’re fortunate to get it.”
Thompson said she contacted owner Chuck Rowland of Greensboro, Ga. about three months ago to see if he would be willing to sell the farm, which he received from his late father, former Laurel County resident Jeff Rowland.
“We had some discussions and he agreed to make the property available, but on the condition that it only be used to create jobs for the city and county,” she said. “His desire is to give back to the community and help create good jobs.”
At the closing in London Wednesday morning, Rowland said he’s had many offers to buy the property, but he was only interested in selling now because of how it will help his former hometown secure a better future.
“I’m excited about the authority’s plans for the property and the good things they will do with it,” he said. “That farm has been a blessing to our family and I think it’s time to share that blessing with the community.”
Government leaders praised the land purchase for what it means for future growth in the region.
“Laurel County is positioned perfectly to attract warehousing, manufacturing and service industries with our crossroads location.” Laurel County Judge-Executive David Westerfield said. “Adding more good jobs and growing our tax base will help keep our county strong for years to come.”
London Mayor Troy Rudder said “we applaud the authority for having the foresight to keep enough land in inventory for future projects. We need to be ready to grow. We don’t have an industrial park on the west side of town, and this will bring growth there.”
Thompson said the authority will begin immediately to develop and market the industrial park.
Meanwhile, work continues on the 200,000-square foot distribution center JRD Systems is building in the Greer Industrial Park on Ky. 1006. The authority also has a potential new client for the 60,000 square foot speculative building inside the Greer Park.